Coeliac Disease is a permanent autoimmune disorder. When the body ingests Gluten (a protein found in wheat, rye, barley and often forgotten oats) it initiates an immune response that attacks the small intestine.  This causes damage by flattening the villi found on the intestine wall. Villi are responsible for increasing the surface area needed to absorb nutrients, thus when villi become flat it hinders the body’s absorption and has major health implications (see the simple diagram below). 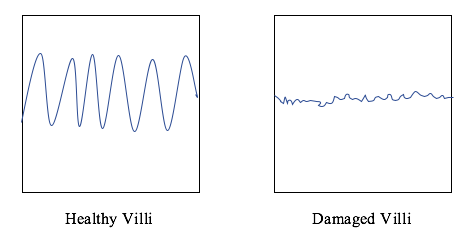 Consuming Gluten can cause an array of gut-related symptoms which will be different for each individual. For example:

Who gets Coeliac Disease?

Coeliac Disease is something you are born with, and although more common in females, it affects both of the sexes. It is not contagious; however, you may not know you are Coeliac until later life (commonly 40-60 years of age) as your body changes. The disease can also be hereditary and first-degree relatives have a higher risk of developing the condition.

Unfortunately, Coeliac Disease cannot be cured and those diagnosed will remain sensitive to Gluten throughout their life. Symptoms however can be prevented by following a strict Gluten free diet and will only return if Gluten is reintroduced into the diet.

I hope this article has been helpful in introducing you to Coeliac Disease, however there is still loads more  information on the disease and Gluten free living. Feel free to comment and ask any questions below!